How can you recover criminal assets held in cryptocurrencies? If you’re pursuing a recalcitrant debtor or sophisticated fraudster who happens to be using cryptocurrencies such as Bitcoin, you might feel as though you’ve hit a dead end. How can you recover assets from someone who has specifically gone out of their way to hide their wealth in digital currencies? Well, as Burford’s recent case study shows, options are available and paths to recovery exist, so long as you know who to ask and where to look.

Bitcoin (BTC) is a digital currency based on a protocol that allows data to be stored in a transparent and unalterable way in a decentralised ledger, essentially, a database that everyone has a copy of, known as the Blockchain. Bitcoin is the first example of a cryptocurrency, an asset class similar to that of traditional “fiat” currencies, but whose supply is controlled by lines of code, rather than central banks. Transactions are verified using cryptography. Cryptocurrencies are typically traded via exchanges, which act as digital marketplaces connecting buyers with sellers, and stored using digital wallets.

Much has been written about the anonymity of cryptocurrencies and Bitcoin and the unbreakable cryptographic verification and encryption used to secure records of transactions in the blockchain. It is no secret that this is why it is often favoured by criminals, techies and investors alike. In fact, it is precisely because if this underlying technology that every Bitcoin transaction of any size is publicly viewable, provided of course that you know what you are looking for! 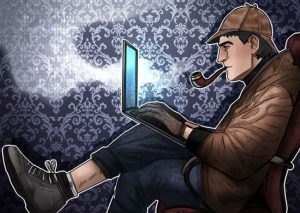 Our case study concerns two UK residents (for our purposes here let’s refer to them as Smith and Jones) who ran a series of fraudulent schemes that netted them tens of millions of pounds. After the frauds were uncovered, Smith and Jones entered insolvency, no doubt hoping to come out clean the other side upon discharge. Needless to say, Smith and Jones were not forthright with the trustees and the investigation uncovered neither assets recoupable to the estate nor answers concerning the whereabouts of the millions in pilfered investor funds. If the trustees were to make any recovery, it was clear that a highly complex, long-running and expensive investigation would be required.

The trustees sought help from Burford and its team of asset recovery specialists. We have experience partnering with resource-strapped insolvency estates, in which our role typically entails identifying assets, formulating a legal route to recovery, and funding the ultimate recovery of those assets. In the case of our debtors, Smith and Jones, it became clear early on in our investigation that they may have squirreled away some of the fraud proceeds into cryptocurrencies. Far from being a dead-end, we uncovered actionable intelligence with the use of traditional tools in the insolvency war chest that lead us to new third-parties, offshore accounts, and sight of fund flows suggestive of Smith and Jones’s access to substantial liquid assets that they did not disclose to the trustees.

We had reason to suspect that Smith and Jones held undisclosed cryptocurrency assets. Our initial desk-based research identified various domains for bitcoin investment websites registered by known proxies of Smith and Jones at around the time of their bankruptcies when they were registering other offshore businesses which were used to siphon proceeds of the fraud. We knew from their backgrounds that Smith and Jones were tech-savvy investors, so it seemed possible that they knew their BTC from their ETH, and how cryptocurrency investing and trading could make them some money.

Our suspicions were confirmed when we obtained documents which appeared to show payments, albeit nominal sums, being made by Smith and Jones to UK-based cryptocurrency exchanges. We got hold of these documents via a combination of traditional disclosure orders and overseas discovery mechanisms. What we did not understand, however, was why the exchanges also appeared to be making payments back to Smith and Jones.

We approached one of the UK-based exchanges for disclosure of all records relating to Jones, Smith and their proxies. The exchange disclosed a host of information, including Bitcoin wallets, Bitcoin addresses, and transaction IDs, information which (aside from the exchange) is only usually held by the holder of the Bitcoins or the parties in a Bitcoin transaction. Bitcoin addresses, for instance, are like email addresses, but instead of sending messages they are used to send and receive Bitcoin. The exchange also disclosed details of a six-figure sum deposited into the exchange from an offshore account held by a third-party company incorporated in a banking secrecy jurisdiction. Crucially, the exchange disclosed that the contact on the account and the owner of the company was Smith and Jones’s known proxy.

What our analysis showed was that Smith and Jones’s bagman attempted to pay a UK bitcoin exchange on three separate occasions: first, direct from his Belize bank account; second, from a Dubai account held by a third-party company; and third, via a third-party payment processor. On the first two occasions, the payment was returned because the bagman failed the exchange’s KYC and AML tests. By verifying the bitcoin addresses and transaction IDs associated with his third payment in the blockchain (at www.blockchain.com/explorer) and cross-referencing with the payment dates we saw on various account statements, we were able to map Smith and Jones’s crypto fund flows, transactions from one wallet/address to another, during the period of their insolvencies.

Ultimately, our inkling that Smith and Jones held digital assets lead us to seek disclosure from cryptocurrency agents, such as exchanges, that ultimately lead us to previously undisclosed bank accounts, third-party companies and domains outside of the jurisdiction. This crucial intelligence contributed to our overall understanding of Smith and Jones’s modus operandi and our global enforcement strategy, particularly when used in conjunction with the traditional powers available to insolvency practitioners.

As with most investigations, new leads typically raise more questions than they do answers, but hopefully, this case study shows that Bitcoin should never be a dead-end. Information can be gleaned about cryptocurrencies and can progress your investigation, provided you’re knocking on the right doors!

Rupert Black, author (and son of Andy Black) This article was first published on KNect365 Law and is available here.

We use cookies to ensure that we give you the best experience on our website. If you continue to use this site we will assume that you are happy with it.OkPrivacy Policy